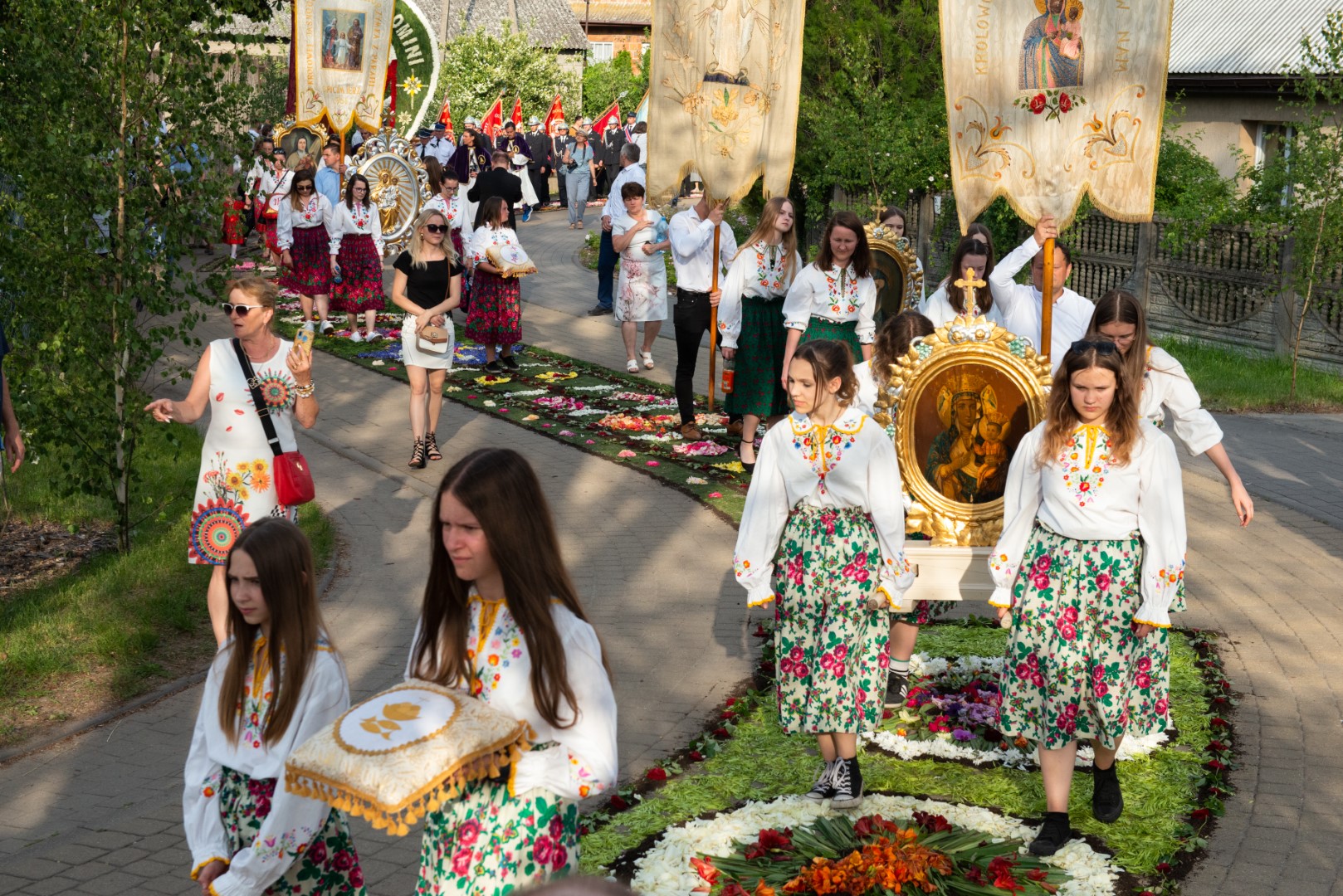 This year’s Corpus Christi was the first celebration in Spycimierz since the tradition was inscribed on the Representative List of Intangible Cultural Heritage of Humanity six months ago. The news of the entry spread very quickly throughout the country, attracting considerable media interest. The inhabitants of the parish and, in particular, the management of the Parish Association “Spycimierz Corpus Christi ” gave numerous interviews for the press and Internet portals as well as statements for film materials. These additional duties did not prevent the parishioners from doing what was most important: arranging flower carpets for the solemn Corpus Christi procession.

There were plenty of flowers

Guests who arrived in Spycimierz at Corpus Christi at noon were dazzled by the variety of designs and colours and the intense, wafting scent of fresh flowers over the carpet. No wonder – this year was dominated by aromatic roses and jasmine and elderberry, and also red poppies and blue cornflowers gathered in the surrounding fields and arranged in clever patterns.

As always, some of the patterns referred to contemporary themes. There were also striking motifs of doves of peace and Ukrainian colours, which was an obvious expression of solidarity with the Ukrainian people and a message of peace.

The crowds of visitors, larger this year than in previous years, walked in concentration along both sides of the carpet, admiring the colours, patterns, and above all the creativity of the artists. Viewers stopped for a longer time by the residents who were finishing their sections and closely watched the laying technique and admired the cooperation of the members of the various families.

Punctually at 5 p.m. a Holy Mass was celebrated by the Ordinary of Włocławek, Bishop Krzysztof Wętkowski. After it, a solemn procession composed of parishioners and numerous guests set out from the church. Above the procession there was a huge crucifix surrounded by symbolic motifs of flowers. The work was done by guests from the city of Artena in Italy, where for years the tradition of building floral crucifixes for the Corpus Christi procession has been cultivated.

It is hard to believe that thousands of people who walked on the floral carpet did not manage to trample it to the end. After the procession, a distinct colourful trail remained along the Corpus Christi route. But only for a short time, because in the evening the creators of this colourful masterpiece came out on the route with brooms to thoroughly clean the streets. When asked if they are not sorry that there is not much left of the carpet, they invariably say that they are glad that the Blessed Sacrament passed through Spycimierz in such a unique setting, and they are already looking forward to next year, when they will again gather flowers and arrange the route.

Concerts of violinists from Kaustinen

This year’s Corpus Christi celebrations in Spycimierz received a special setting because of the entry on the UNESCO list and thus the inclusion of the local tradition in the world cultural heritage. Funding for the accompanying events was possible thanks to a grant from the Marshal of the Łódź Voivodeship and support from the Uniejów Commune. The plan for this year’s Corpus Christi Festival included the presentation of other traditions inscribed on the world list and – as every year – the invitation of the Italians associated in the “Infioritalia” umbrella organisation. From the UNESCO list the invitation was extended to a unique musical tradition from Finland:  Kaustinen fiddle playing. Finnish musicians responded positively to the invitation. The municipality of Kaustinen financed the bus journey to Poland, and the Marshal’s grant made it possible to cover the costs on the spot.

The Finnish violinists gave three concerts – one in the collegiate church in Uniejów and two on the Corpus Christi feast in Spycimierz. In the 4,300-strong municipality of Kaustinen in central Finland hundreds of inhabitants keep alive a tradition of music and dance, with the violin as the main instrument. Catchy melodies played without reading notes by musicians aged between 12 and 80 won the hearts of the audience in Uniejów and Spycimierz. The first violin was played by Mauno Järvelä, honoris causa doctor of Stradivarius Academy.

The old style of playing survived mainly thanks to the method of learning by ear. The transmission of skills based on the master-student model has ensured the preservation of both the old style and a repertoire that includes hundreds of melodies. Earlier the tradition was passed down in families, nowadays it is taught in schools, among others in special classes for children called Näppäri. The most important event in Kaustinen is the annual Folk Music Festival attended by thousands of amateur and professional musicians from all over Finland and the world.

The Kaustinen fiddle tradition was inscribed on UNESCO’s Representative List of the Intangible Cultural Heritage of Humanity in 2021.

This is the first Polish tradition, placed on the UNESCO world list in 2018. Marek Markowski, a crib maker and one of the initiators of the entry on the UNESCO list, brought his works to Spycimierz. The art of crib construction has been handed down from generation to generation continuously since the 19th century. The constructions are usually made of wood, plywood and cardboard, and they are decorated with colourful paper, tissue paper and staniol – multicoloured, shiny, metallic foil. They obligatorily refer to the historical architecture of Cracow and are its creative interpretation. The central place in the nativity scene is occupied by the Christmas scene.

The most important event is the annual competition held on the first Thursday in December. Set on the steps of Adam Mickiewicz monument in the Market Square, they are judged by a professional jury.

The exhibition in the parish church was very well chosen showing the variety of traditions in terms of style, colour and size.

The floral crucifix of Artena

The Infiorata dei Cristi takes place on the occasion of the procession in honor of Our Lady of Grace of Artena. The special features are large wooden crucifixes decorated with reeds, wild asparagus and thousands of flowers. The procession leaves from the Sanctuary of Our Lady, passes through the streets of Artena and ends at the Collegiate Church of the Holy Cross. For a week, the image of the Madonna of Grace can be seen along with flowered crucifixes and processional flags.

The feast was established in 1731 and is held regularly on the eve of the third Sunday in May. In addition to the many faithful, it is attended by brotherhoods, active in Arten since the Middle Ages. Flower crucifixes appeared in the procession for the first time in 1861. They are made by members of the brotherhood, and the art of making them is passed on to subsequent generations.

Three artists from Artena came to Spycimierz, bringing with them a special frame on which they arranged a composition of flowers on a green base of garden dill for several days before Corpus Christi. On the over two-meter-high construction the guests from Italy arranged the inscription “Corpus Domini” (Italian for “Corpus Christi”), the image of the host, the Uniejów coat of arms, and logos of the Association “Corpus Christi in Spycimierz” and UNESCO’s intangible cultural heritage. A large floral crucifix, carried in the procession, attracted attention.

The places where the concerts took place, the floral crucifix was displayed, and the permanent Krakow nativity scene were specially marked and described with information boards.

Handing over the letter of intent

The visit of 37 musicians from Finland was a very good opportunity to establish cooperation. The Mayor of Uniejów Józef Kaczmarek handed over the letter of intent concerning the beginning of cooperation with the Finnish Folk Music Institute in Kaustinen. The Mayor cares about the fact that the “Spycimierz Corpus Christi” Historical and Cultural Centre, which is being created in Spycimierz, will build its brand and competences thanks to a wide network of cooperation with institutions from Poland and abroad. The Institute, which has been operating for almost 50 years, is for us an unrivalled example of long-term work in the field of education, documentation, research and promotion of cultural heritage. It brings together many excellent professionals whose knowledge is regularly used by UNESCO.

“We would like the Corpus Christi Centre to follow a similar path of development as the Finnish Folk Music Institute, i.e. to work systematically for the depositories of our tradition, and at the same time to promote the diversity of the world’s cultural heritage. We also serve our resources and open them to you. I have great hope that we will be able to establish fruitful cooperation” – wrote the Mayor of Uniejów in the letter of intent.

The ceremony of handing over the letter of intent took place on the 15th of June in the Gniezno Archbishops’ Castle in Uniejów and a day later during the meeting of the residents of the parish with the guests from Krakow, Kaustinen and Artena in the hall of the Voluntary Fire Brigade in Spycimierz.

During the preparations and the ceremony itself the artist-photographer Janusz Tatarkiewicz took professional documentary and at the same time artistic photographs of the families participating in the transmission of traditions in order to preserve for future generations the memory of the families who every year lay the flower carpet for the Corpus Christi procession. Photos by Janusz Tatarkiewicz illustrate this article and are available at the Spycimierz Social Archive at spycimierskiebozecialo.pl.