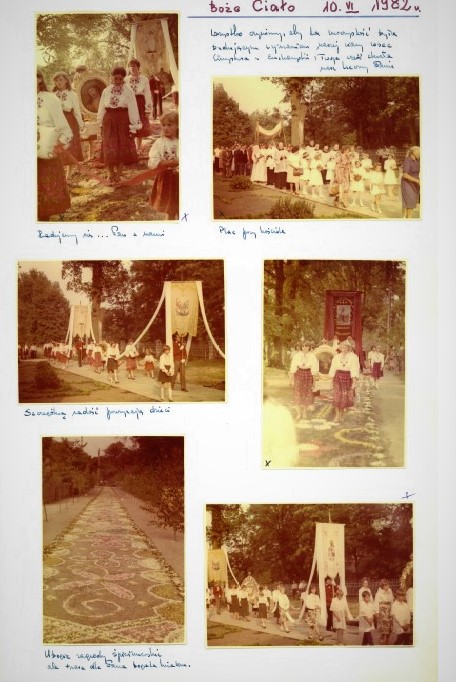 The earliest history of Spycimierz is very strongly connected with a wide river valley created here by the Warta river. Above the vast marshy terrain grew habitable “clumps” that have been a haven for people for millennia.

In historical sources, the name of the village Spycimierz appears in different variations: from the earliest Zbuczmir (document from Mogilno), through Spycimir (times of Długosz), to Śpićmierz (beginning of 16th century). At the end of the 18th century, Śpicimierz was written. The name currently in use is Spycimierz.

On a relatively small, about 5 km long area between today’s Spycimierz and the so-called Smulska Góra (situated between the villages of Wieścice and Trzymsze on the border of the Uniejów and Przykona Communes) in pre-state times a common territory called Opol was established. The research carried out in the Smulska Góra area indicated that the trees intended for the construction of the stronghold were cut down at the beginning of the 10th century. The people living there built the stronghold, clearly fearing the power of the Piast tribe coming from the west. In unknown circumstances, the castle on Smulska Góra burnt down and people moved to a much more promising place called Spycimierz.

According to the 16th-century historian and heraldist, Bartosz Paprocki, the founder of the settlement was Spycimir, a protoplast of the Lelewit family, who in the times of prince Władysław Herman (at the end of the 11th century) granted it to the archbishops of Gniezno. We have no source material to confirm or deny this story.

At the beginning of the 12th century, there was a castellan’s stronghold in Spycimierz, which was the centre of the prince’s power in the area, and which guarded a strategically important route from Moravia to Kujawy. In the oldest Polish chronicle by Gall Anonim, the author notes that Duke Bolesław III Wrymouth, waging war on his brother Zbigniew, imprisoned Archbishop Marcin, a supporter of his rival, in Spycimierz. This probably happened in the winter of 1106-1107. Archbishop Marcin had another chilling adventure in Spycimierz: he was surprised here in 1108 by the Pomeranians and it was only thanks to his cleverness that he managed to save himself from being kidnapped. However, the unfortunate incidents of Archbishop Marcin at Spycimier allow us to conclude that the local town was a solid one, well connected with the rest of the country. Krzywousty clearly appreciated Spycimierz.   We write more about the castellan’s stronghold here.

In the middle of the 12th century, a document known as the Mogilno forgery was created (originally dated 1065). It mentions Zbuczimir, or Spycimierz, from whom the Benedictine monastery in Mogilno collected 7 grzywnas of silver a year. This was about 1.2 kg of pure silver, so quite a lot!

The end of the golden age of the former castellany was the Teutonic Knights’ cruise. In 1331 the settlement was burnt down by the troops of the Order. Traces of this raid, visible in the form of burnt structures, were uncovered during archaeological research . Over time, in the place of the former ring stronghold, a knightly residence was established – a conical castle, where a knight’s tower was erected on an artificially built mound – a motte.

The title of castellan of Spycimier, which was a senatorial dignity, was retained until the end of the First Republic.

In 1347, Casimir the Great exchanged Spycimierz with Archbishop Jarosław Bogoria Skotnicki for the existing archbishop’s estates: Przedecz, Żarowo, and Monice. Spycimierz had favourable conditions for the location of a town. It was located on an important trade route leading from Morawy, through Sieradz, Uniejów, Łęczyna towards Gdańsk Pomerania. In medieval Spycimierz there was a market and a customs house on the crossing of the Warta River. The gradual collapse, however, missed the chance to develop it into a town. At the cost of Spycimierz, Uniejów developed.

A very interesting element in the history of Spycimierz is the information by Jan Długosz about the oldest sundial in Poland, located in the village. Its contemporary and at the same time symbolic version was created in 2014.

From the 16th to the 19th century. The epiphany

At the beginning of the modern era, Spycimierz included seven lans of land, four of which were inhabited (data from 1512). It is also mentioned that there were two farmers and 14 fishermen. In 1728, the Spycimierz parish consisted of about 200 believers. In 1775, there were 30 residential buildings in the village. In 1793, as a result of the Second Partition of Poland, the village came under Prussian rule and due to the secularization of church property in 1796, it became government property. In turn, as a consequence of the resolutions of the Congress of Vienna in 1815 Spycimierz found itself in the Russian partition (in Kalisz province). Data from 1827 state that the village consisted of 50 houses inhabited by 434 people.

In 1836, for its contribution to suppressing the November Uprising, Spycimierz became a property of tsarist general Karol Toll, and then of his heir – count Alexander Toll. The village remained in the possession of the Toll family until the end of World War I.  Zdjecie Tollów

According to T. Figlus, today’s Spycimierz takes the form of a multi-street village with an irregular building structure and a complicated layout of plots. It is a unique relict of an early feudal period settlement, which is a valuable element of the cultural landscape of a village in central Poland.

The spatial arrangement of Spycimierz is most probably the result of a spontaneous, linear development. It was influenced by the population and the spatial shape of the area. As a result of the mentioned adaptation of the land, a multi-block rural layout with block-like, irregular parceling was created. The buildings form an irregular structure characterized by a chaotic arrangement of buildings located along internal roads with a complicated course. Also today it forms a layout of a multipath village.

According to the attached simplified village plan by Gille, the outline of a contemporary multipath settlement can be observed. In the north, there is an oval-shaped settlement, created along the curve, which is the base of the roads. The first one to Uniejów, going north. The second one to Ewinów, going west. In the center of the old Spycimierz an open square was located, which was the place of the first market of the original settlement. In the northern part of the village, where the church was located, there were empty lots, just like today. The village buildings of Spycimierz were symbolically marked with only modest signs.

In the 1930s a fire station of the Voluntary Fire Brigade was built in Spycimierz. After the Second World War, a new wooden church was built on the site of the destroyed church, which was replaced by a brick church in the years 1986-1992.

Spycimierz is today one of the biggest villages in the Uniejów commune. It occupies an area of 613.12 ha. According to data as of 31 December 2010, it was inhabited by 348 people.

Since 2 March 2016, in Spycimierz there is a parish association “Spycimierz Corpus Christi”, whose task is to cultivate the old tradition of flower carpets and to organise the celebration of the holiday and the procession route.

Chapels and other investments

The face of the village of Spycimierz has changed a lot in recent years, mainly due to investments carried out by the commune with large use of European funds. The parish’s very good cooperation with the Uniejów Townhall has had its share in this.

As part of another project, altars in the form of village chapels were created along the route of the Corpus Christi procession, referring to the history of the Eucharist cult and Corpus Christi itself. These are uniquely artistic and sculptural installations. The first of the chapels, built near the church, is the chapel of St Juliana, who in the face of the moon, obscured by a layer of clouds, had a revelation – in order to bring about the establishment of the celebration of Corpus Christi. The next one, located near the descent to Siekiernik, was entitled “The Tree of Life”. It is a reference to the antique cross that used to be in Spycimierz, in the wooden church. At the moment, in the National Museum in Poznan, there is its last element – the head of Christ, the replica of which will be placed in the altar, giving the sculpture a character referring to the history of Spycimierz. Another chapel, situated on the plain near the ponds and the backwaters of the river, depicts a tower with blanks and St Barbara. In the centre of the village, there is the largest altar, closed in the form of a roofed chapel, dedicated to St Anthony. It is decorated with an ornament made of lily flowers, which are an attribute of the saint.

The commune has planned further undertakings, including in the framework of the “Reconstruction of roads in the Uniejów commune” the surface of communal roads in Człopy and between Spycimierz and Łęg Baliński was repaired and modernised. In Zieleń a new traffic route was built which connected the commune road (the Uniejów section from the football pitch complex towards Spycimierz) with the district road (the section from Człopy towards Spycimierz), increasing the comfort of everyday use of the route, and on Corpus Christi making the traffic towards Spycimierz clearer. In turn, the creation of a connector before the entrance to the village freed the village centre from cars, leaving the Corpus Christi route at the exclusive disposal of parishioners arranging flower carpets.

Within the framework of the investment “The arrangement of the water and sewage management in the Uniejów commune” a sewage system will be built on the section Zieleń – Spycimierz. Another project involves the modernisation and enlargement of the sewage treatment plant in Spycimierz and the reconstruction of the current water supply system in the Człopy sołectwo.

In 2021. Uniejów Commune began the construction of a new cultural facility – the Spycimierz Corpus Christi Centre. The investment was preceded by extensive archaeological research. The opening of the facility is planned for 2023.