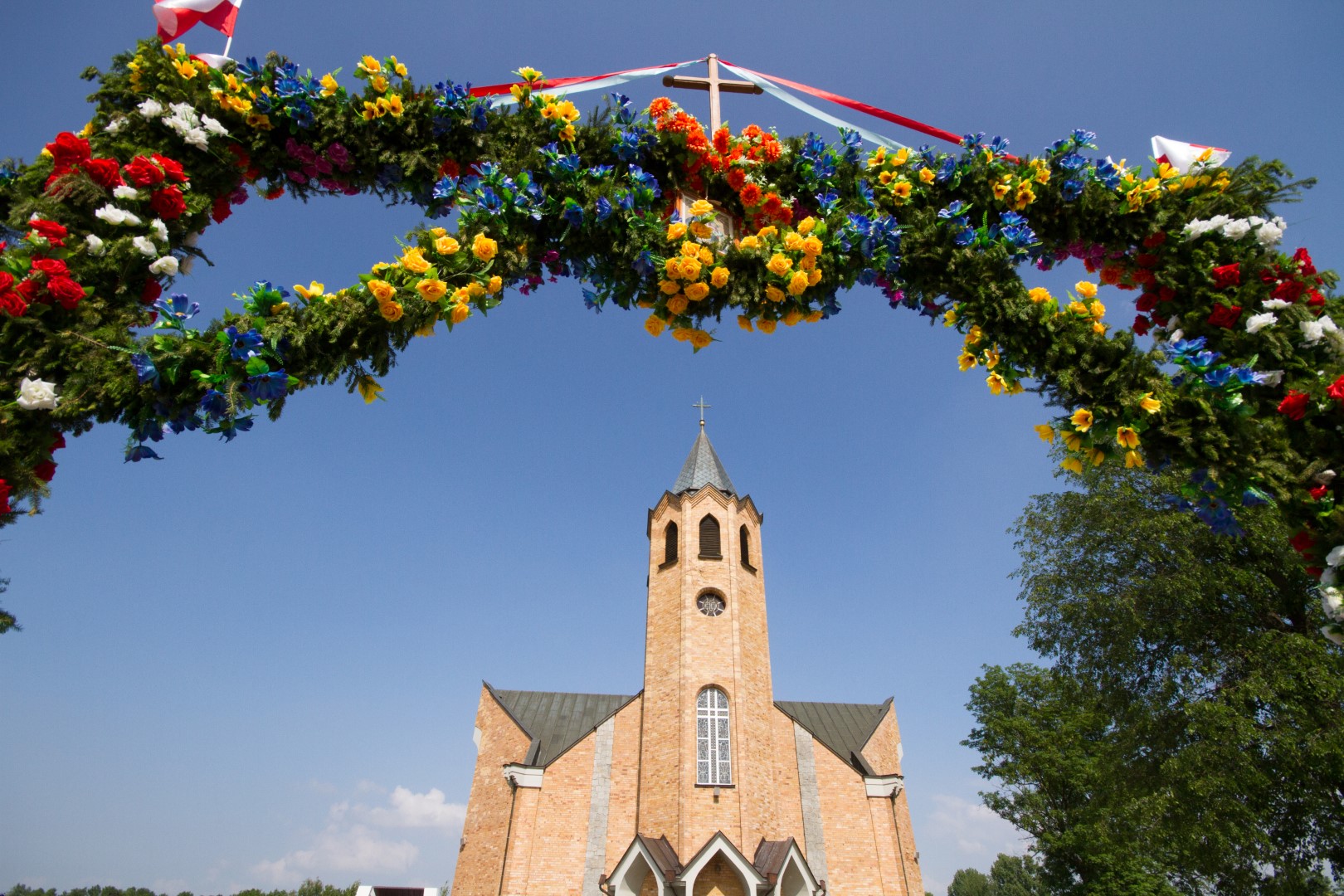 The first mention by Gall Anonim proves that there was a church in Spycimierz in 1106. However, as the construction of a temple was connected with the creation of a parish, it should be assumed that the parish was established before 1106 and belonged to the deanery of Warta. The care was provided by diocesan priests. A significant change in the status of the parish took place in 1491 when it was incorporated into the collegiate church of Uniejów and entrusted to the care of the College of Mansions. Only after 1865 Spycimierz received its own parish priest. After 1818 the parish found itself within the borders of the diocese of Kujawy and Kalisz, in the deanery of Uniejów.

During the Second World War the parish priest Marian Chwiłowicz, despite warnings, did not leave his parishioners, and being expelled from the presbytery, moved to the organist’s house and from there led the parish. There the Germans arrested him and deported him to the camp in Dachau, where he was murdered on 27 July 1942.

Parish priests and administrators of the Spycimierz parish

History of the church in Spycimierz

The first information about a temple at the Spycimierz stronghold dates back to 1106/7 and was recorded by Gall Anonim, who mentioned the Archbishop of Gniezno, Marcin. The church itself must have been built earlier. Information about the first temple is very scanty, limited only to the above-mentioned Gall’s account: it was wooden with arcades.

The second temple, probably founded by the Archbishop of Gniezno after 1347, was consecrated, as evidenced by traces on the walls. In 1612, it must have been very old, because even the oldest people did not remember under what name it was erected. Shortly before that year, a new altar of Our Lady of Czestochowa was placed in it.

The visitation records of 1728 state that the church bears the invocation of the Exaltation of the Holy Cross and its dedication day was celebrated on the Sunday after St Francis. It was a wooden church, longitudinally oriented, with a tower signature in the middle. The third altar dedicated to St. Onufry was inserted in 1728. The walls were crooked, the ceiling old. Although the shingled roof on one side had been extended and repaired, the bell tower and the vestry remained in a deplorable condition. The main altar, dedicated to the Holy Cross, had a painted and gilded image of the Crucified Jesus. It was venerated as miraculous, as evidenced by the numerous votive offerings, which were plundered by Swedish invaders and thieves.

The poor condition of the temple caused that in 1780 bishop Jan Mikołaj Dembowski, inspector of the Uniejów collegiate church, acting on the authority of Archbishop Antoni Kazimierz Ostrowski, instructed the senior mansion Wieczorkiewicz to erect a new temple in Spycimierz. Some money was already collected and deposited with the Uniejów canon – Sztein. The missing funds were to be provided by the sale of silver, probably from votive offerings.

The new temple was built quite quickly – in the years 1783-84. At that time the belfry from Uniejów was probably also moved here. At that time a wooden church was built (partly of larch wood), on a foundation, without any chapel, with a cupola-shaped signature tower. The consecration of the church was carried out by priest Jan Pigłosiewicz, the canon of Uniejów, on the authority of the consistory of Łowicz. The church probably received the old furnishings and the same invocation. The main altar with a very damaged figure of the crucified Christ was painted black with gilding, there were also two figures: St. Wojciech and St. Stanislaw. On the right side, in the altar of St. Onufry, there was an image of St. Mary Magdalene. Next to the pulpit, on the left side, there was an altar to Our Lady of Czestochowa, and in its upper part there was an image of the Annunciation of the Blessed Virgin Mary. In 1863, a silver cross was donated to the November Uprising fund. The church was well equipped with liturgical paraphernalia. This decoration changed only at the beginning of the last century.

The Second World War was a dark period in the history of the church and the parish. In 1943, the Germans barbarously demolished the church and later burned the miraculous cross, of which only the head of Christ survived.

This is how one of the parishioners describes it: Images of moments full of terror and fear appear before my eyes, including the dramatic scenes of the looting of our parish church. I don’t remember what year, month, or day it was (1943), but it was undoubtedly a day of great pain for the entire parish, including our family. By the church in Śpicimierz there was a large ladder cart, harnessed to two black horses. The church was open: the church furnishings were carried out – banners, procession floats, crosses and other things. I don’t remember who did it. Two people remained in my memory: a German commissioner and a Pole from our parish, who knew “their” language. The commissioner was holding the monstrance and trying to break the rays out of it, but he didn’t manage to do it… Several frightened children were hanging around the cart… The Pole who was present at the robbery, stealthily, whenever possible, gave us the objects that were to be taken away… My parents were sitting sad and crying. Dad said: “Judgement day! Maybe God will give, that one day there will still be a church and these things will come in handy!”… The church in Śpicimierz was pulled down, and the demolished material was used to build a “szlachtuz” – an animal slaughterhouse – in Uniejówby Hanna Klata, “It was – has not passed. A talk about Śpicimierz” in: „Ład Boży”, supplement to “Niedziela” No. 16/2000, p. 3).

In the church burned down in 1943, the miraculous crucifix from the first half of the 14th century was destroyed. Only the Head of Christ survived. After the war it was moved to the National Museum in Poznan, where it is still kept today, being one of the exhibits in the Gallery of Medieval Art.

In May 1945, Father Henryk Wieczorek came to Spycimierz. In the years 1945-46, a wooden temple was erected under the old invocation. In 1948, a tower was added. In 1977-83, it underwent a thorough renovation. Side altars were brought from Skęczniewo.

It must be remembered that the wooden post-war church was built in a difficult period, using materials available at that time, and did not represent a very high architectural value. Therefore, when Józef Gawłowski, who came from Spycimierz, made a donation to build a funeral chapel in the cemetery, the idea of building a new brick church was born.

The present church was built in the years 1986-1992 thanks to the efforts of parish priest Wojciech Krzywański and with the great commitment of the parishioners and the parishioner, Father Florian Pełka SJ. The new church was designed by engineer Jan Kopydłowski from Poznan. It is built of brick and covered with copper sheeting. The polychromy is wet fresco and sgraffito, designed by Gizela Klaryska of Toruń and Jerzy Pasternak of Cracow. The frescoes refer to the name of the temple and the thousand-year presence of the Church in the history of the Polish nation.

The main altar is decorated with the elements of the former church, including the following sculptures: God the Father (beginning of the 18th century), Christ Crucified (the 17th/18th century), figures of Mary, St John the Evangelist, St Peter and St Paul (the 18th century), as well as St Stanislaus the Bishop (mid-18th century) and St Florian (the 17th/18th century). The church was consecrated by Bronisław Dembowski, the then Ordinary of Włocławek, on 13 October 1992. The church contains a special papal gift – a marble bust of the Polish Pope, the work of the Italian artist Albino Sirsi, and relics of the Holy Blood of John Paul II.