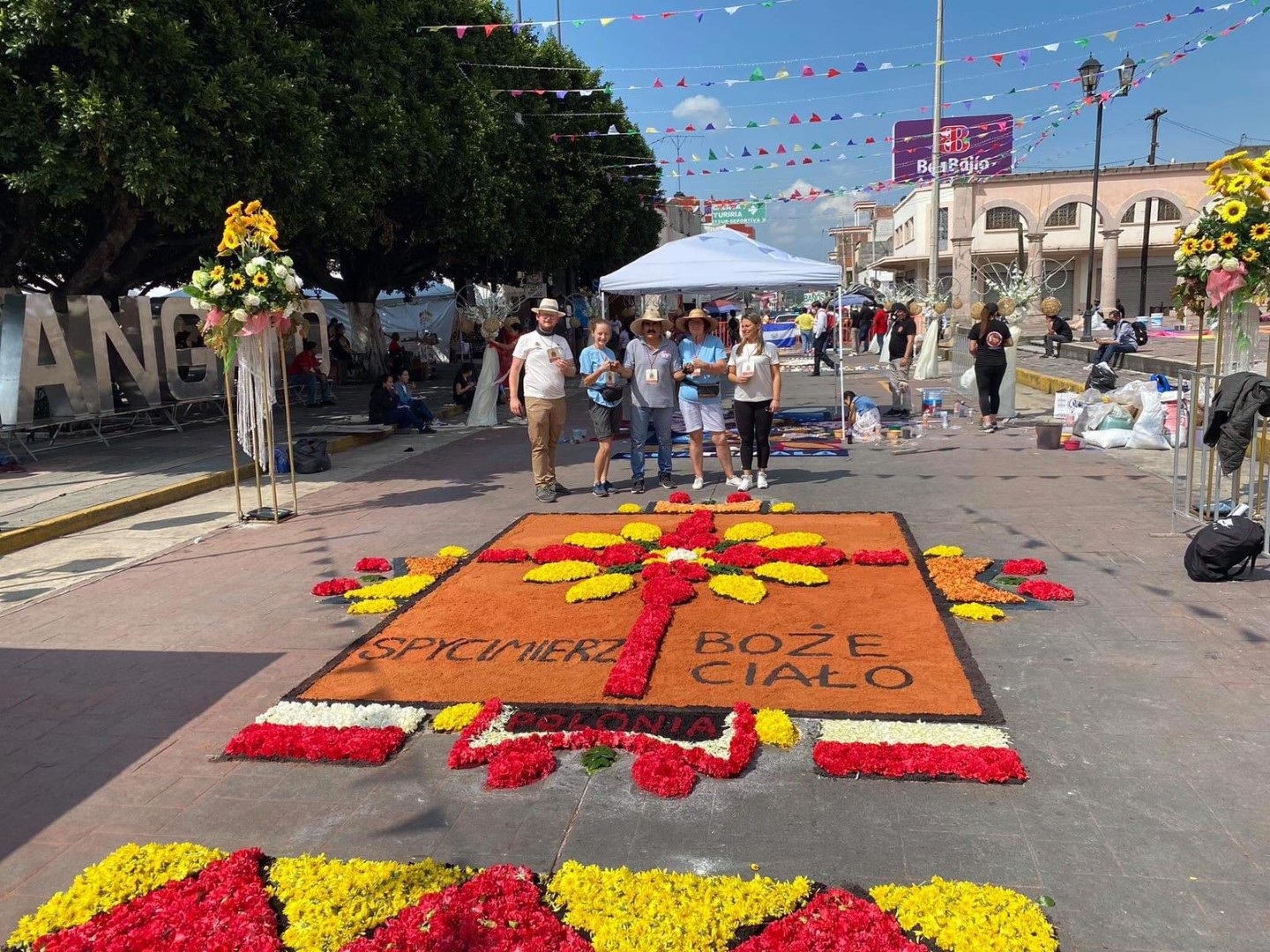 On 2 March 2016, the Parish Association “Spycimierz Corpus Christi” (Spycimierskie Boże Ciało) was established in Spycimierz, which after two months was registered in the National Court Register in Łódź. The main aim of the Association is to actively safeguard the tradition of floral carpets on the feast of Corpus Christi in Spycimierz and to take care of the religious dimension and sacred character of the annual celebrations of this holiday. The association is headed by Joanna Winnicka. The board also includes: Rev. Dariusz Ziemniak, Anna Kurzawa, Beata Klimczak, Grzegorz Górka, Magdalena Karniszewska, and Jolanta Ilska.

The Association contributes to the greater involvement of the whole parish community in this beautiful tradition with an emphasis on its religious symbolism and Christian dimension. The members of the organisation were the main initiators of efforts to include the tradition of laying flower carpets on the National List of Intangible Cultural Heritage. They participated in writing the application, completing photo documentation, and obtaining consent for listing from every resident involved in the tradition. In 2017, Rev. Wojciech Kaźmierczak, whom the inhabitants gave the appropriate authorisation, submitted an application to the National Heritage Institute for entry on the National List of Intangible Cultural Heritage. 14 February 2018. The Minister of Culture and National Heritage inscribed the Corpus Christi Procession with the tradition of floral carpets in Spycimierz on the list. On 22 October 2018, a delegation of parishioners received a commemorative plaque during a ceremony at the Royal Łazienki Park in Warsaw.

In 2019/2020, the Spycimierz Corpus Christi Parish Association became involved in working on the application for inclusion on the Representative List of the Intangible Cultural Heritage of Humanity. They cooperated in making a film about the tradition, collecting documentation and signatures of bearers for the declaration of prior, free and informed will to submit the tradition of floral carpets for Corpus Christi processions to the World List. 30 March 2020 on behalf of parishioners from Spycimierz and four villages in the Opolskie Voivodeship, where floral carpets are also laid, the Minister of Culture and National Heritage sent an appropriate application to the Secretariat of the United Nations Educational, Scientific and Cultural Organisation (UNESCO).

The rhythm of holidays

Thanks to the establishment of the Association, old activities are being strengthened and new ones have been introduced in the life of the local community. In Spycimierz the calendar of the most important events in the life of the parish is marked:

The logo of the Parish Association “Spycimierz Corpus Christi” is used to illustrate the tradition of laying floral carpets. It refers to the feast of Corpus Christi, which was established to honour Jesus Christ in the Blessed Sacrament. In the logotype we see a monstrance with a white host inside. The design of the monstrance refers to the live flowers, from which colourful carpets are arranged in Spycimierz.

Since 2018. The Association co-organises seminars in the form of interdisciplinary workshops as part of projects co-financed by the Ministry of Culture and National Heritage and the Uniejów Municipality. Residents take an active part in the workshops and social consultations, and community representatives prepare presentations as well as take part in debates.

An important role of the Association is cooperation with scientists, who carry out scientific research in the field of ethnology, geography, tourism, and history as part of projects. – We always try to help the researchers so that the work proceeds according to its scope and schedule. We help gather materials, organise people for interviews, and provide photos and archival documents, says Maria Pełka, former president of the Association.

Since 2014, the community of the parish in Spycimierz has participated in many events abroad, during which it presents its cultural heritage. The first trip the Spycimierz people made was to Spain. On the feast of Corpus Christi in the town of Ponteareas, they arranged a 5×6 m. floral painting depicting the alpha and omega.

In June 2015, a delegation travelled to the Vatican, where they fashioned a multicoloured floral picture in St Peter’s Square that attracted the attention of numerous visitors. A year later, the inhabitants were guests at the 6th International Flower Arranging Congress in Noto, Sicily.  The painting depicted a scene from the legend of the blind castellan from Spycimierz. In the same year, in Irkutsk, Siberia, representatives of the parish together with an Italian delegation arranged a portrait of John Paul II from pollen. In May 2019, a floral painting depicting a cross and a chalice was created in Pietra Ligure, Italy. The year 2021 was marked by a long journey to Mexico. During the festival of floral paintings, the delegation from Spycimierz presented a composition containing the Association’s logo.

In the summer of 2021, Spycimierz inhabitants participated in an international project on the occasion of the Year of St Jackob. Inhabitants of 250 localities on 5 continents arranged floral paintings on a July weekend depicting the same composition referring to the cult of St Jackob. However, the style, choice of material and dimensions were left to the choice of the composers. The painting made in Spycimierz could be admired in front of the parish church.