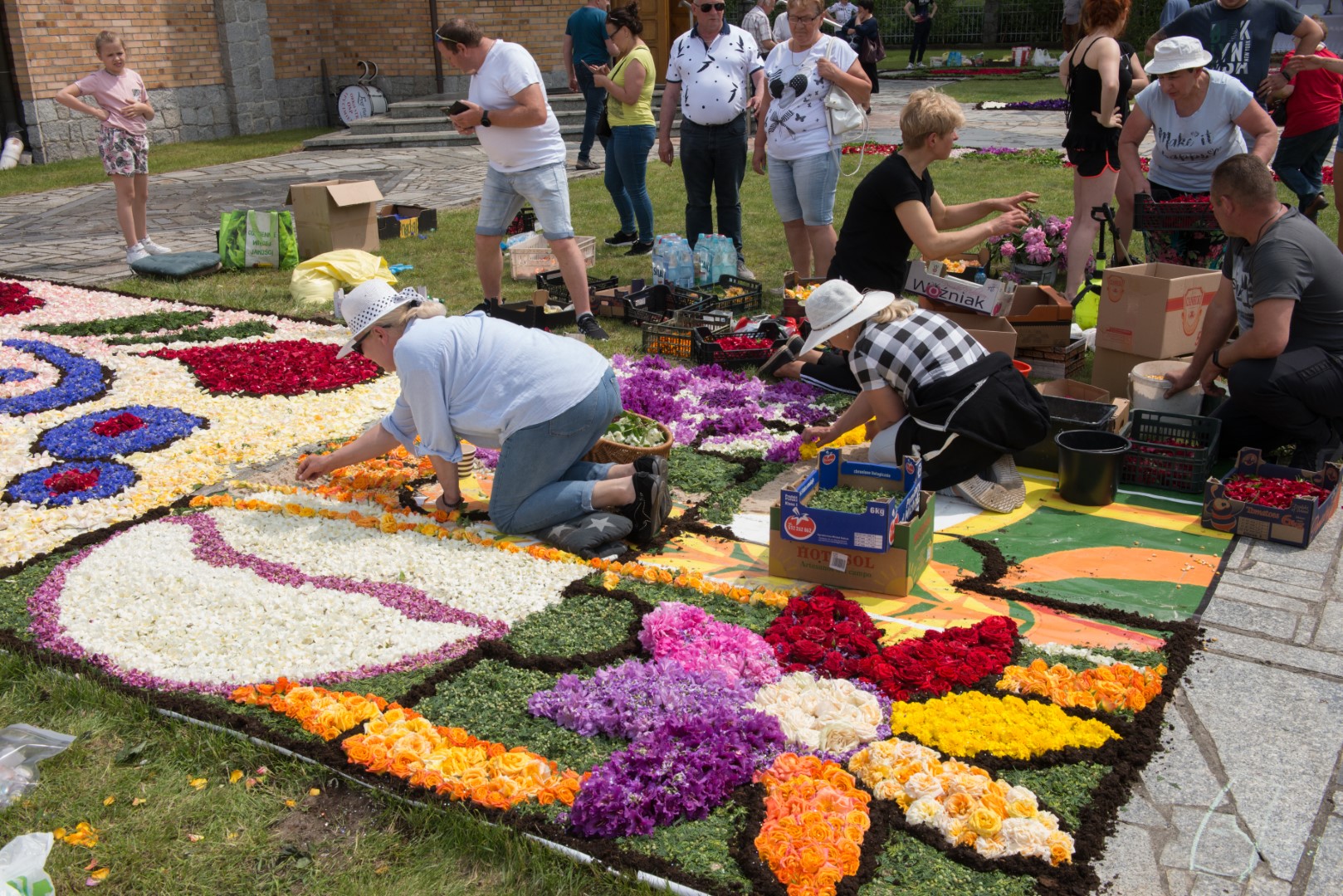 The strength of the community

The tradition of arranging flower carpets for the Corpus Christi procession has changed over the years. Initially, the decor was modest – yellow sand and twigs were used, later flowers were used, and the current way of dressing the route was shaped after 1945. The procession route, over a kilometer long, is covered with a colourful, patterned flower carpet two meters wide, while the roadsides are decorated with young birches and alders sometimes pennants.

Laying flower carpets, which is the culmination of the preparations made during the year, usually begins around nine o’clock and lasts until two to three, depending on the number of people, work organization or the length of the segment.

Family crews create individual segments of the floral carpet. And while there is usually no chief conductor to allocate tasks, everyone knows what to do. Virtually all those who feel attached to the parish and this pious tradition mobilize to the best of their strength and capabilities. In the past, the procession route changed and ran along different roads, and the obligation to decorate a given section was most often the responsibility of the residents of a given property.

Today, after a permanent route has been marked out, the task is distributed among the entire parish community, especially families whose houses lie along the procession route. There are over twenty of these families and it is their duty to tune the section of their property. Often it is several dozen or even more than a hundred meters long, so you need to involve many family members and friends. Both debutants and masters of ceremonies, seasoned with arranging floral compositions, rush to the main street. Children, teenagers, adults. They are driven by the need of heart and attachment to a tradition that has been cultivated for years. They come together with baskets, boxes, buckets filled with leaves, racks of some structures, stems, bark, and flowers usually collected from the Sunday preceding the holiday.

An interesting story is related to the white sand, which is used to attach flowers to a flower carpet. “We had dunes in the past. Even in the 1920s, sand even stuck to the windows of houses. It was poured, among others, by washed floors in homes. And it is this sand that is used to maintain flower arrangements to this day. Currently, in the place of the former dunes, there is a forest planted by a priest and children. So far, we have been bringing sand from there to the procession route. At the same time, dark earth is used for contrast,” says Maria Pełka, president of the Parish Association “Spycimierz Corpus Christi”.

Patterns are also changing. In the past, carpets were only decorated with floral motifs. In recent years, religious themes have started to appear, such as hosts, monstrances, crosses, angels, and Marian images. However, it has been noticed that some of the procession participants are reluctant to follow such patterns. “Such diversity is interesting for tourists, but we in the Spycimierz parish do it primarily for the sake of faith. The arrangement of flower carpets is also influenced by the changes taking place in the rhythm of rural life and the progress of civilization (as everywhere, the time has accelerated dangerously here). There used to be a lot more time for laying, and today we have to do it faster. In the past, patterns were drawn by hand, today we also reach for inspiration on the Internet “, adds Maria Pełka.