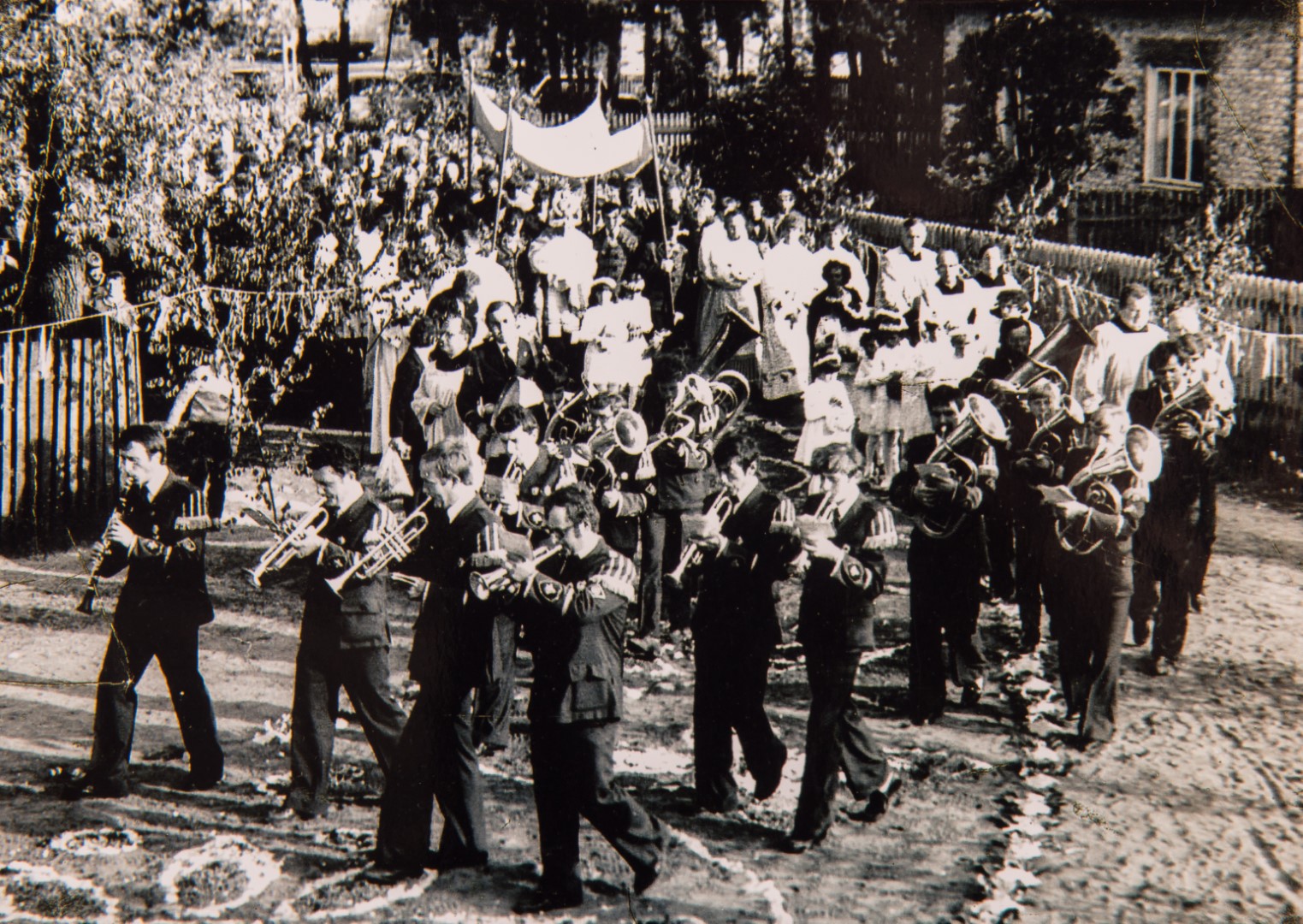 From the past to the future

The Solemnity of the Most Holy Body and Blood of Christ, (commonly known as Corpus Christi) is a liturgical feast in the Catholic Church to celebrate Jesus Christ in the Blessed Sacrament. It falls every year on the Thursday after the octave of Pentecost. The feast was first celebrated in Liège (modern-day Belgium) in 1246, and in 1317 it was established as a feast for the whole Western Church. The first mention of the celebration of Corpus Christi in Poland dates back to 1320 when the feast was introduced in the Diocese of Cracow.

The custom of dressing the road in Spycimierz for the feast of Corpus Christi originated in a period that is difficult to specify since it is not recorded in archival sources. Establishing its genesis is based only on oral tradition. The legend about the appearance of this custom connected with the return of Napoleon’s soldiers to their native village should be considered as the most distant account. They supposedly observed similar customs in Europe and transferred them to Poland. In oral accounts of local people, it is said that the custom dates back to the inter-war period or the early 20th century. The oldest written record can be found in the parish chronicle from 1957. This is mentioned during the bishop’s visitation to the parish in connection with the Corpus Christi feast.

The composition of the floral carpets has changed and evolved over the years. At first, yellow sand and twigs were used, so the old decoration was modest. Later, flowers began to be used, and the current way of dressing the route took shape after 1945.

For the glory of God

Undoubtedly, the origins of this custom in the parish of Spycimierz have to be sought in the extremely strong cult of the Eucharist, which motivates the parishioners to take great care and dedication in preparing the procession route. Deep faith often comes through in the expressions of the inhabitants: Whoever can, the best roses from the garden, the best flower they pluck, they do not look. The important thing is to give and to look nice. There are people in Śpicimierz who grow flowers in their gardens especially for Corpus Christi. And it is all done for the glory of God. Selflessly, without money, no one asks for a zloty for anything or fuel. As the Spycimierz inhabitants themselves say, they are making all the preparations for the celebrations […] to the glory of the Lord. That is the only way! Because He only comes through our roads once a year, He goes to bless our homes and see how we live, how we live, He passes among us to bless our village. And we thought after this humble flower carpet for that. Moreover, they are very proud of their tradition and do their best to make the prepared flower carpets as beautiful as possible. It is very important for the people of the parish to be beautiful. Everyone wants his place to be the most beautiful. […] Strangers come, they admire, they say, Mother, how beautiful it is here, how much work you have to put in. Of course, it motivates them, but still, there is such pride inside. I am proud then. But it’s not for myself or my neighbour, we all make these carpets together for the glory of God. It was beautiful, we celebrated everything beautifully, but it wasn’t like it is now. Now it’s just super, super beautiful.

The processional carrying of the monstrance with the Blessed Sacrament to four altars is inextricably linked with the celebration of Corpus Christi in parishes in Poland. Oskar Kolberg, the 19th-century outstanding ethnographer, in his series of publications describing the people in particular regions, in the volume Kaliskie (DWOK, vol. 23) wrote a short general historical note about the Corpus Christi procession in the former Sieradz province: “The feast of Corpus Christi brings out a numerous procession from the church to the village or to the courtyard, where, as usual, at four altars, freshly exposed to the four directions of the world, the local priest, led by the collator-child and assisted by some monk from a nearby monastery, completes the religious rite”.

Some processions, such as the one in Łowicz, are distinguished by a rich setting in the form of a long procession of the faithful dressed in traditional costumes. In Spycimierz and several villages in the Opole region, the custom of laying floral carpets along the procession route is practised, but only in Spycimierz does the priest with the monstrance, followed by the rest of the participants, walk the entire route on a floral carpet.